CITIZENSHIP UNDER THE CONSTITUTION OF INDIA

Citizenship can be defined as the relationship between an individual and a State to which the individual owes allegiance. The purpose of citizenship is to confer upon the individuals certain rights and duties within the state, and an international protection abroad. The Citizen of a State enjoys rights and privileges and a status of belonging to that nation, unlike an alien who does not have any allegiance to the particular State, hence does not enjoy any right or owe responsibilities.

Citizenship at the Commencement of Constitution

The question of citizenship gained prominence at the time of making of the Constitution for the purpose of designing an appropriate framework with respect to Citizenship, conferring upon the individuals their rights and duties on being granted the status of a Citizen. At the commencement, the Constitution however did not lay down a comprehensive law relating to citizenship in India and declared that the power to regulate the law in this regard shall vest with the Parliament.[1] Constitutional provisions from Art.5-11 of Part-II primarily deal with conferment of citizenship. Art.5 through Art.8 described the classes of individuals who would be deemed to be the citizens of India at the date of commencement of the Constitution.

Under Art.5 the individuals who fulfilled any of the alternative conditions that, “they being born in India or either of the parents being born in India or had been ordinarily resident in India for not less than 5 years immediately prior to the commencement of the Constitution were entitled to be citizens of India under Citizenship by domicile. Domicile is not defined in the Constitution, however according to law, residence in the country and an intention to make it home is necessary to constitute domicile.

Art.6 gave provisions related to Citizenship by Migration, which was an important criterion to be addressed in view of large number of people being migrated from Pakistan. Under Art.6 an immigrant from Pakistan, if he or either of his parents or any of his grandparents was born in India along with the condition that if such person migrated before July 19th, 1948, and ordinarily resided within the territory of India since the date of such migration were to be granted Citizenship without registration, and in case of such individual being migrated on or after July 19, 1948, had to register with the government of India after 6 months of an ordinary residence, to be a Citizen.

Citizenship by registration falling under Art.8 had been described as another class of citizenship at the time of the commencement of Constitution, according to which an individual who or either of his parents or any of whose grandparents was born in India before independence but who is ordinarily residing outside India and Pakistan may register himself as citizen of India with the diplomatic representative of India in the country of his residence.

The Citizenship Act, 1955 and subsequent Amendments

It is to be noted that the provisions discussed so far, focused only on the classes of citizens at the commencement of Constitution, and legislation with respect to the law relating to acquisition of Indian Citizenship after the commencement of Constitution was required, hence the parliament empowered so under Art.11 enacted the Citizenship Act, 1955 to provide for acquisition and determination of Indian citizenship.

The Act provides for five ways of acquiring Indian citizenship which can be briefly looked into as follows,

Sec.3 of the Act provides, (a) a person born in India on or after 26th January, 1950, but before 1st July 1987 (amendment, 2003), Or on or after 1st July 1987, but before the commencement of the Citizenship Amendment Act, 2003 and either of whose parents is a citizen of India at the time of his birth is a citizen. (b) a person born on or after the commencement of the Amendment Act of 2003, where both of his parents are citizens or one of his parents is a citizen and another not being an illegal immigrant is a citizen of India, provided that at the time of his birth neither of his parents possesses a diplomatic immunity and neither of his parents is an enemy alien and his birth occurs at a place under enemy occupation. It is interesting to note that, Bombay High Court in 2012 ruled that a man who was born in Pakistan-administered Kashmir and entered into India was an Indian Citizen and should be granted Indian passport, since India considers the entire Kashmir region to fall within the Indian borders.[2]

Sec.5 provides a list of categories of persons who can acquire citizenship through registration provided they are not illegal migrants.

Sec.6 provides any foreigner may become a citizen of India though application to the government for naturalization if he fulfills the list of conditions provided under the section.

Sec.7 provides that on any territory becoming a part of India, the individuals on that territory may be granted Indian Citizenship if the Central government deems right.

The Citizenship Act of 1955 has been amended in 1986, 1992, 2003, 2005, 2015 and 2019. The 1986 amendment restricted citizenship by birth to require that at least one parent had to be citizen of India; the 2003 amendment added to it that the other parent cannot be an illegal immigrant. Much discussed and constitutionally unsettling provisions have been those introduced through the 2019 amendment which was passed by the parliament on 11th December, 2019. Provisions of this amendment act opened a path for illegal immigrants of Hindu, Sikh, Jain, Parsi and Christian religious minorities, from Pakistan, Bangladesh and Afghanistan who entered India before December 2014 to acquire Indian Citizenship. The act also relieved the residence requirement for naturalization from twelve years to six years for the immigrants in this category. The amendment act, ‘CAA’ triggered country wide protests due to the discriminative nature of the provisions towards a particular religious community. According to Intelligence Bureau records, there will be just over 30,000 immediate beneficiaries of the bill.[3]

This article has been written by Ms. Hajra Kulsum, student of University College of Law, Osmania University, Hyderabad.

[3] Explained: why Assam, Northeast are angry; by Abhishek Saha; The Indian EXPRESS

Sun Sep 6 , 2020
Dear Friends, We at Vakeel Sahab Platform feel privileged to host an online lecture with Mr. Kushank Sindhu , Advocate & Partner – Sigma Chambers, on the topic “An Overview of Anti-Corruption Laws in India” on 07 September 2020 at 7pm-8pm. Please register through the given number. 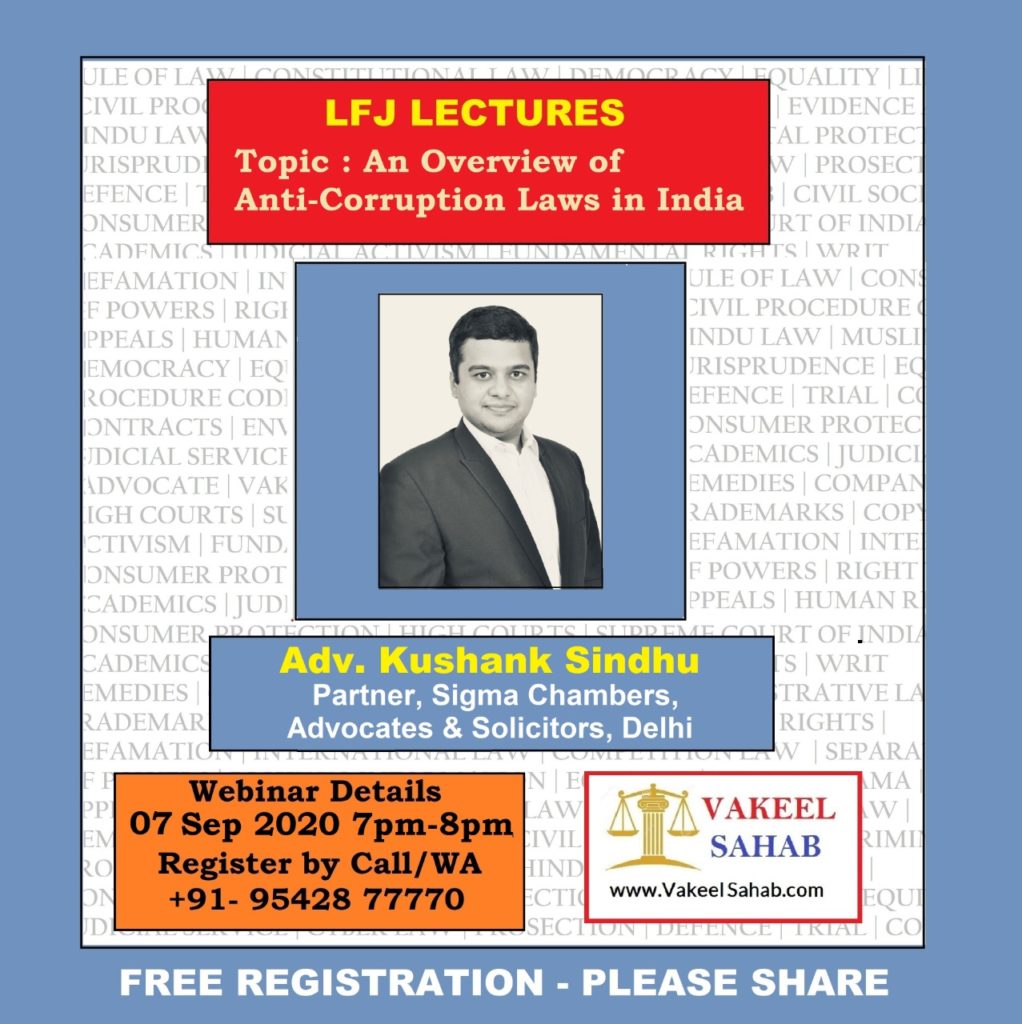