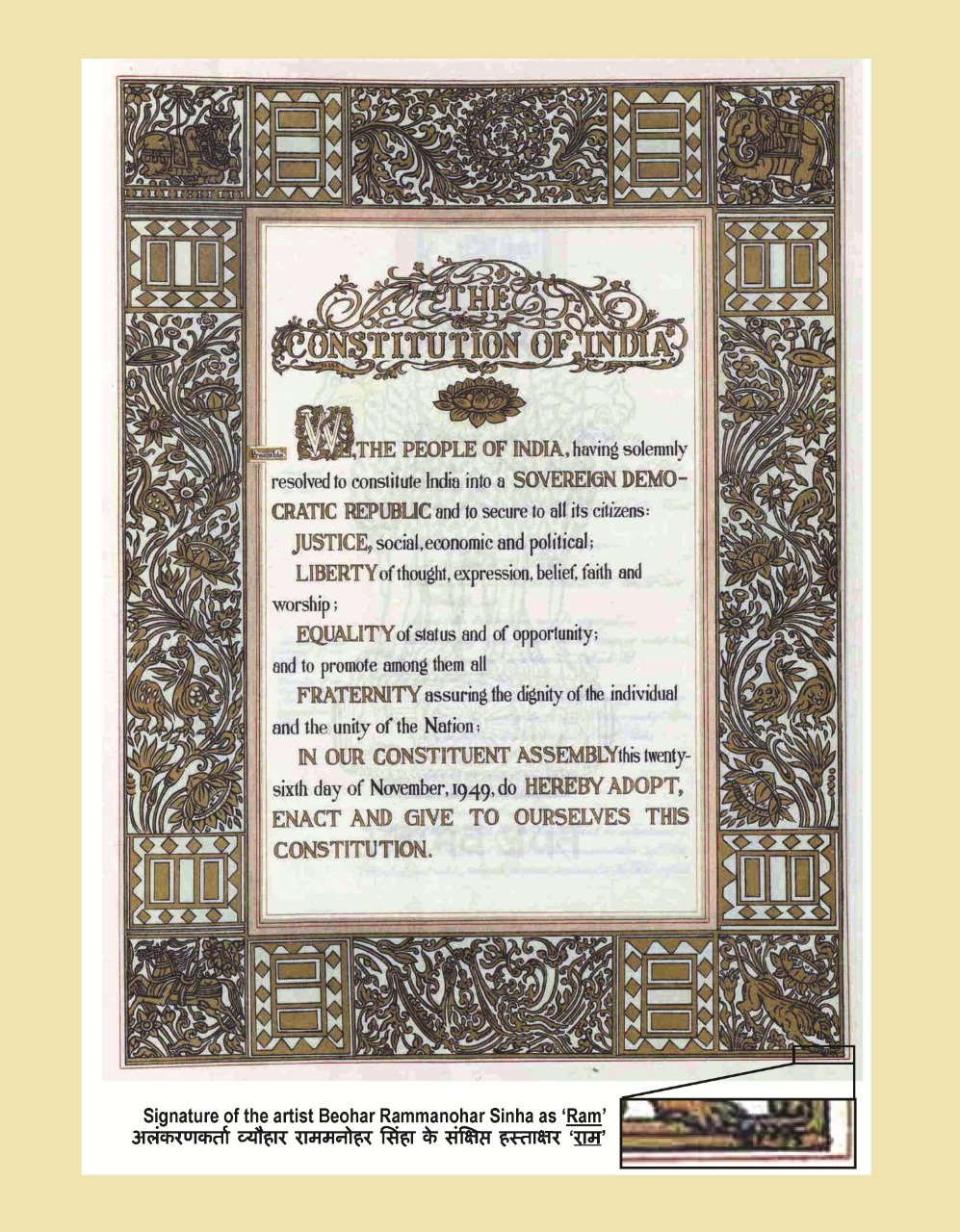 PREAMBLE TO THE CONSTITUTION OF INDIA

Preamble is termed as introduction to the constitution, however, it would be precise to call it an abstract of that detailed document which is considered amongst world’s lengthiest Constitutions. The constitution of India has a Preamble that is elaborate enough to make anyone comprehend the spirit, the vision and the purpose of this nation. It contains the fundamentals summarizing the aims and objectives of the whole Constitution, furthering its direction. The origin of the preamble is found to be the “objective Resolution” presented by Pandit Jawaharlal Nehru to the Constituent Assembly in 1947, the ideals embodied wherein, reflect in the Preamble to the Constitution.

The preamble does not expressly grant any power but it contains the enacting clause that brings the Constitution into force; and it reads,

WE, THE PEOPLE OF INDIA, having solemnly resolved to constitute India into a  SOVEREIGN SOCIALIST SECULAR DEMOCRATIC REPUBLIC and to secure to all its citizens
JUSTICE, social, economic and political;
LIBERTY of thought, expression, belief, faith and worship;
EQUALITY of status and of opportunity;
and to promote among them all FRATERNITY
assuring the dignity of the individual and the unity and integrity of the Nation;
IN OUR CONSTITUENT ASSEMBLY this 26th day of November 1949, do HEREBY ADOPT, ENACT AND GIVE TO OURSELVES THIS CONSTITUTION.

The expression “We the people” as it begins, marks the significance of source and authority the Constitution derives from and also demonstrates the will, the sanction and the force behind the Constitution to be the very people of this country; and that there lies no external coercive imposition of the same. This assertion affirms the Republican and Democratic character of the Indian Polity and the sovereignty of the people. This nature of the Indian polity has been set forth in the Preamble through the words, ‘Sovereign, Socialist, Secular, Democratic, Republic’.

The broadest guidelines which the Preamble holds in the shortest form of its jargons are further expounded with its right vision as follows.  The first word ‘Sovereign’ refers to the independence of power of one’s state which is not subject to the control of any other external force or any other foreign state. Preamble declares India to be Sovereign which means that the Constitution is ordained by its own people through their representatives formed as a Constituent Assembly, competent to determine the future of the country. The Indian Constitution as a sovereign State has power to legislate on all branches except to the limitation as to the division of powers between the Centre and the States and also subject to the fundamental rights guaranteed under the Constitution. [1]

The word Democratic signifies the nature of political system wherein, the state is governed by a parliamentary form of government accountable to a legislature which contains the representatives elected by the people. The Supreme Court has declared democracy as a basic feature of the Constitution.[2]

Having discussed the three important political stands of the state of India it is prominent to note that the preamble has been amended only once so far, through 42nd Amendment of 1976 by which the words, ‘Socialist’ and ‘Secular’ were inserted and the word ‘Integrity’ added to the expression ‘Unity of the Nation’ making it ‘Unity and Integrity of the Nation’.

The word ‘socialism’ has not been defined in the Constitution. The introduction of the word in the Preamble however, has made the commitment to this ideal strong and explicit. Nevertheless, socialism envisaged here is not to be interpreted as Nationalization of all means of production and elimination of the role of Private production. The Indian Constitution does not seek to abolish private property but seeks to restrain it in the interest of the nation and upliftment of the poor, envisaging a mixed economy with equal opportunity to all.[3]

The ‘Secular’ nature of the state signifies that, India while being a diverse land with different cultures and religions, stands united and the Constitution grants the State a Secular status in every approach of its governance and existence. In other words the State protects all religious equally and does not itself uphold any religion as the State religion. The explicit introduction of the word Secular in the Preamble through 42nd Amendment is not be taken as the introduction of the Secular spirit and ideal to the Constitution for the matter of fact that, the concept of Secularism had always been there even before 1976. The Supreme Court further declared Secularism as the basic feature of the Indian Constitution.[4]

In the various natures of Indian polity enunciated so far lies meagerness in terms of a substantial implementation, and therefore emerges the need of strong pillars to achieve the same. Those pillars are, in the Preamble, mentioned as ‘Justice, Liberty, Equality, and Fraternity’. Justice as in the words of Salmond, “means to distribute the due share of everybody.” The constitution attains for the achievement of justice in all the three main spheres, the Social, the Political and the Economic. The term Political Justice implies that every citizen has an equal opportunity irrespective of any difference in the matter of public employment and to implement the democratic ideal, which is to elect their representative and to hold any political office. Economic Justice emphasizes the abolition of poverty and concentration of wealth; while Social Justice is referred to commitment towards equality in social life, abolition of untouchability and equality before Law being two examples. The word ‘Liberty’ of thought expression, belief, faith and worship underlines the role of freedom within the Constitutional limitation as one of the strengths to a better nation. The Preamble further mentions ‘Equality’ of status and opportunity, which is required to remove obstacles incurred in the growth of different sections of society; and ‘Fraternity’, the spirit of brotherhood amongst this heterogeneous population, as the makers of the Constitution envisage, to be crucial to achieve the unity of India. All the ideals embodied in the Preamble are so interconnected that one remains insignificant and unattainable without the other.

This exemplary framework summarized as a Preamble is evident to the unique spirit of the Indian Constitution.

This article has been written by Ms. Hajra Kulsum, student of University College of Law, Osmania University, Hyderabad.

Citizenship under the Constitution of India

Sun Aug 30 , 2020
CITIZENSHIP UNDER THE CONSTITUTION OF INDIA     Citizenship can be defined as the relationship between an individual and a State to which the individual owes allegiance. The purpose of citizenship is to confer upon the individuals certain rights and duties within the state, and an international protection abroad. The […]